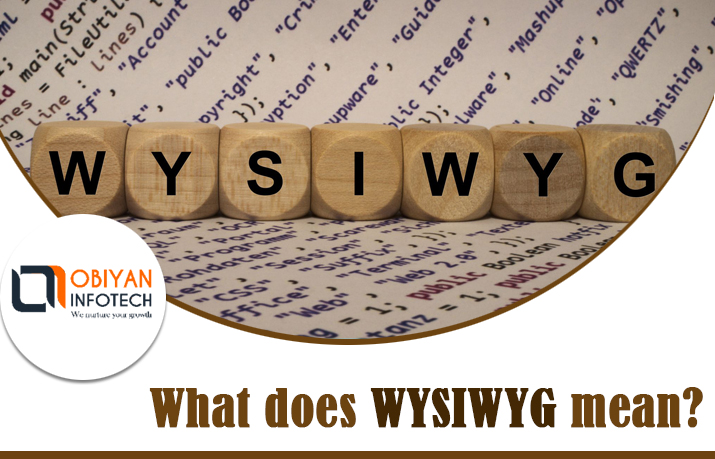 What you see is what you get. “WYSIWYG is a computer term meaning. There are two meanings for this acronym. First, it refers to the ability to print a document exactly as you see it on the computer screen. The second meaning is that what you see on the screen is the result of the editor as an application to create a website and wysiwyg full form is What You See is What You Get.

In the early days of desktop publishing and word processing, a writer or layout designer might approach how a screen page appears to print. Still, unless their application had a “print preview” option, they did—no way to ensure the output until the page has been physically printed. Raw word processors required the user to set printer codes with the result that many pages were hit and miss until you perfected the layout.

WYSIWYG editors make the creation of any type of document easier for the end-user. By seeing how the document will be published or printed on the screen, the user can adjust the text, graphics, photos, or other document elements before committing as a final project.

You can read also: HTML WHAT IS IT?

The role of WYSIWYG in technology

Many people ask full form of wysiwyg in computer and what is its role? WYSIWYG is an acronym used to indicate computer publishing systems that allow users to create and edit documents, presentations, and other digital works. A WYSIWYG editor accomplishes this task by providing an interface for users to view the final result when creating or modifying it.

Why it’s called a WYSIWYG

A long time ago, when you wanted to bold or italicize, in some cases, you needed codes around the text itself. This made the text difficult to read and did not give an accurate picture of the result. Once computers incorporated high-end graphics (the original 1984 Macintosh was an example), computers could then tell what your document would look like when you printed it.

What you see in the editor is basically what you will see on the finished product, hence the phrase “What you see is what you get.” Instead of saying every word of the sentence or every letter of the acronym, this type of editor is called “wiz-ee-wig” and is pronounced exactly like this.

The three main types of WYSIWYG editors are word processors, desktop publishing applications, and website design editors. The first two can see what the printed page will look like before printing, whereas web design applications allow the creator to see what a website might look like before going live.

The first WYSIWYG editor was introduced in 1984 for Macintosh computers, with PageMaker Aldus Corporation by users introducing Windows to the new interface type. As they developed new applications, users demanded that the software continues with the “what you see is what you get” interface. Today, most applications are for writing, drawing, and writing publication to include, at least, the possibility to activate the option WYSIWYG.

Because they are more graphic in design, a WYSIWYG editor usually takes up more disk space than a simple text editor. They also require the use of more memory than a plain editor. The others, web design software, in particular, have a learning curve in understanding how documents should be laid out before they become a final project.

All processors no words are WYSIWYG; most screenwriting software does not have this capability. Only by clicking on the “print preview” option can the user see their scenario before printing. The same is true for programs like Windows Notepad and other simple word processors, available for download.

A WYSIWYG editor lets you see text or web pages exactly as they appear in the finished product instead of entering countless lines of code. Formatting, effects and organization resemble the actual appearance of the final version to allow users to control the visual qualities of their work.

Using a WYSIWYG editor, fewer power users create websites with a clean and organized design. WYSIWYG editors also add additional emphasis and styling to text, such as in a forum or blog.

Why Are WYSIWYG Editors Important?

Earlier users had to work with computer code (HTML) to generate or edit their virtual parts. The most significant advantage of the WYSIWYG editor is that it gives people without any technical knowledge or experience the ability to develop their digital works from scratch with intuitive technology.

Think about how much time and energy you would have to devote to learning computer programming before you could post a blog post, create a new webpage, or edit a slide for a slideshow presentation.

You can read also: Backlink and Net Linking: what are they?

General characteristics of a WYSIWYG editor

Most WYSIWYG editors are similar, but their styles and offers vary.

To conclude, wysiwyg full form in computer is “What you see is what you get.”

What is the function of an SEO manager?

CAPTCHA: What is it and why is it used?

What exactly is this USP? How to develop one? And how to promote it?